I love a good old-school action film that doesn’t pretend to be anything else other than big, loud, dumb and macho. These sorts of movies are in shorter and shorter supply these days and if you want to stay away from the arty-farty, insightful releases that the critics and award-givers love to wank themselves into a frenzy over then you mostly have to fall back on comic book adaptations or shameful cash-ins of old franchises being resurrected for the modern day. The 80’s is home to the bulk of the truly good stuff but the 90’s also had it’s share of classic action such as 1993’s Demolition Man.

Right from the off, it’s terrible one-liners, massive explosions and bulging muscles so you can immediately throw your brain out of the window, kick back and enjoy some simple entertainment. The basic premise is this: maverick, OTT cop John Spartan (Stallone) is placed into cryogenic imprisonment following his latest battle with the deadly criminal, Simon Phoenix (Snipes) due to the death of thirty hostages that Spartan’s superiors believe were killed as a result of his reckless battle with Phoenix. Phoenix is also cryogenically frozen and manages to escape in the year 2032 during a routine parole hearing.

The future has become a utopian society however where the police force haven’t had to deal with violent criminals or non-natural deaths for over twenty years so they are woefully unprepared to deal with a psychopath like Phoenix who immediately kicks off a rampage of murders and destruction. The only way they can combat Phoenix is to (reluctantly) release John Spartan prematurely.

The plot of Demolition Man is nothing special but really, it is just a vehicle for the two stars to pick up where they left off before imprisonment and wreak havoc in the future. The film has very little lulls and is either a rollercoaster of punch-ups, shoot-outs and explosions or Stallone’s character trying to get to grips with the future, leading to several comical moments and amusing quips. 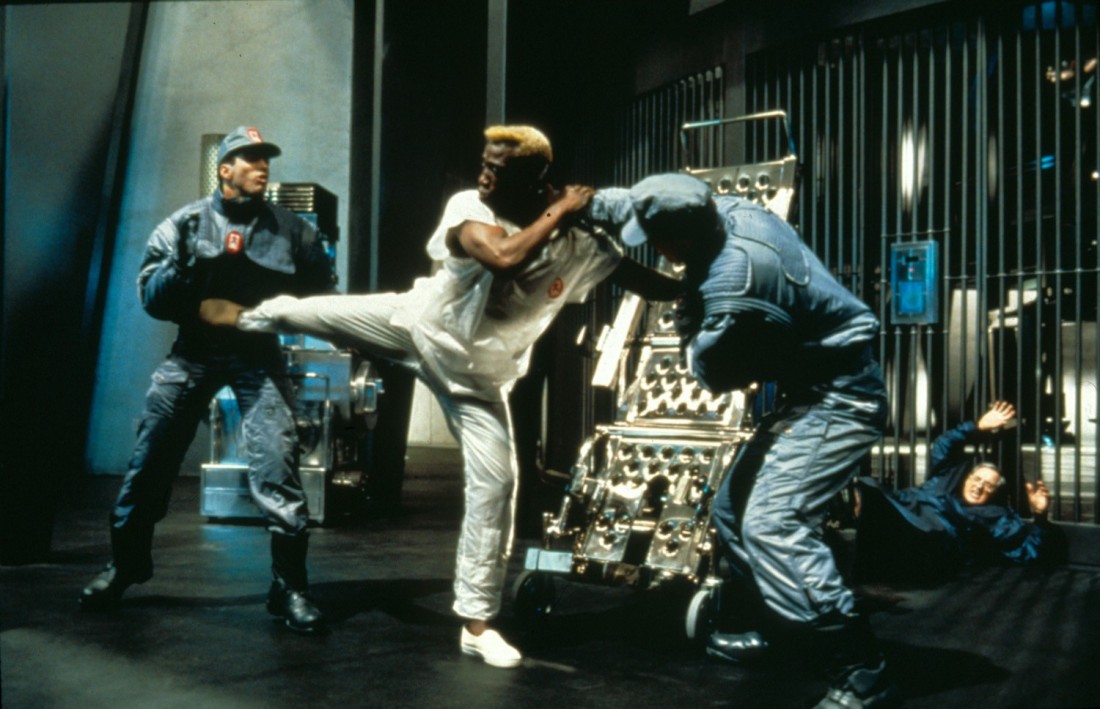 Bizarrely – and in direct contradiction to what I’ve just said about about this being a simplistic action film – Demolition Man‘s 2032 setting actually feels a lot more relevant today and is a right-wingers worst nightmare come true. Crime has been eradicated completely in order to create a peaceful utopia but as a result, a lot has had to be sacrificed. Anything deemed “bad” has been made illegal be that salt on your meal, swearing and even physical contact. So no high-fives, no kissing and certainly no sex. Everybody looks perma-happy and perfectly fine with having absolutely nothing happening at all – ever. Is this the direction that we are heading in reality? It’s possible to see some parallels, especially here in the UK where an increasing number of things are classed as “hate crimes” (resulting in murky waters where a casual, jokey insult might be interpreted as “offensive”) and unhealthy foods are constantly being watered down or taxed in order to protect unhealthy people from themselves.

Putting all of that political/social crap aside though (there are other sites out there that have explored the parallels and the films accurate predictions in much greater depth), the star of the movie is undoubtedly Wesley Snipes in full flow as the nutty Simon Phoenix. His performance as the crazy psychopathic killer is fantastic fun to behold and there is never a dull moment when his character is on-screen. Certainly one of those times where an otherwise repulsive character becomes almost lovable and I would go as far as to say that Demolition Man is worth watching for Snipes/Phoenix alone.

Many look down on movies like Demolition Man as lesser, braindead fodder for those who can’t comprehend “thoughtful” cinema but there’s nothing wrong with simple entertainment at all. Demolition Man is just a lot of fun and sometimes that’s all you require from a movie. Oh and Sandra Bullock looking dynamite in very tight trousers for the duration is pretty nice too.