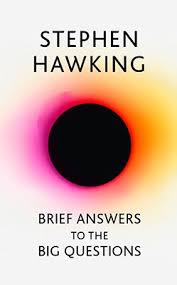 When it comes to books and reading, one of the mini goals I set myself last year was to introduce more variety into my consumption of the published word. I read a lot of fiction (but not from a very varied variety of authors it must be said) and a few magazines and that’s it. A factual, science-related book that I could actually learn a few things from was top of the list so when I saw this book by Stephen Hawking (one of his final projects before he passed away), I picked it up on impulse. It did after all mention black holes on the back and I have always been fascinated by these and the theories behind their existence.

The main selling point of Brief Answers to the Big Questions is that Hawking tackles various subjects and presents his thoughts in a way that even non-science types such as myself can understand. Of course, I still got a little lost when the likes of Quantum Mechanics and various other advanced theories were discussed but on the whole, this was a book that was quite easy to pick up and could easily serve as an entry point into more complex material should I wish to delve deeper.

Of greatest interest to me were the chapters entitled “Will artificial intelligence outsmart us?” and “Will we survive on earth?”. I’ve always been a big subscriber to the possibility that mankind will be eliminated by events that most of us laugh off as sci-fi movie rubbish right now so to read Stephen Hawking’s logical and well-presented thoughts on these matters was very interesting. He reiterates that he is an optimist and has hope for the future of the human race but at the same time, the ease of how we could be rendered extinct by our own doing is quite worrying and Hawking makes it sound so simple and straightforward.

Discussing these subjects with facts at hand and as little speculation, personal opinion or agendas as possible was refreshing for me. It was a reminder of how often we are fed ‘science’ news that is actually tainted with bias, scaremongering or political agendas. Here it is different and if Hawking says that X could kill us all because of Y and Z then you will tend to believe him because he is referencing facts and futures that seem entirely reasonable.

He also has a good sense of humour too which I have to admit, I didn’t expect.

In conclusion, this is a great book that discusses answers to the big questions that many of us have forgotten how to ask, let alone contemplate. Perfect for anybody into science who is already familiar with the work of Stephen Hawking; perfect for people such as myself who require these often complex subjects to be presented in more layman terms.