Many things frequently convince me to part with my faith in mankind and the future of our race. The fact that we use centuries of accumulated intelligence and technology not for our benefit but to continue killing one another for the benefit of mystical beings for example. The periodic threats of nuclear war that threaten millions all because bullish world leaders insist on winning the latest edition of “How large is your penis?”. Or even the idea that maintaining the right to purchase military-grade firearms is of greater importance than innocent children being filled with bullets and thus denied a future, all because they did something as outrageous as show up for school.

All of these things (and countless others also qualifying as entire discussion points in their own right) rarely fail to make me think “we’re so fucked as a race, aren’t we?”. They all pale in comparison to the comments sections on Youtube videos however.

Seriously, I have come to the conclusion that if you wish to see the most hate-filled, racist, cold, emotionless, easily-triggered, tasteless keyboard warriors that the internet has to offer then this is the place to go. You can probably point me in the direction of some less mainstream, off-grid web hangouts where entities (let’s not grace them with the term ‘People’) of an even fouler nature lurk but there are two reasons that make Youtube’s comments so notable as I see it:

It seems that any video in any genre simply cannot exist without a simple disagreement of opinion becoming an issue of the commenters’ racial identity or right to life. I have seen people told to “fuck off and die” for having a different taste of music for example and I’d consider that mild by the standards of Youtube’s trolls. Don’t forget that these entities have standards so low that you’d have to drill down deeper than the deepest layer of the sewage network to even stand a chance of finding them. When you did find these so-called standards, you’d likely feel cleaner by returning to the sewers and taking a swim in that glorious cocktail of piss, shit and used tampons.

I have screen-grabbed an example of such bizarre behaviour to dissect and this (like my “fuck off and die” recollection) is still extremely tame. This is taken from a video of Rocky II‘s training montage. I’ve edited out the names and profile pictures of those involved even though I’m unsure that some of them deserve their anonymity but what can I say; I have a bit of class I suppose. 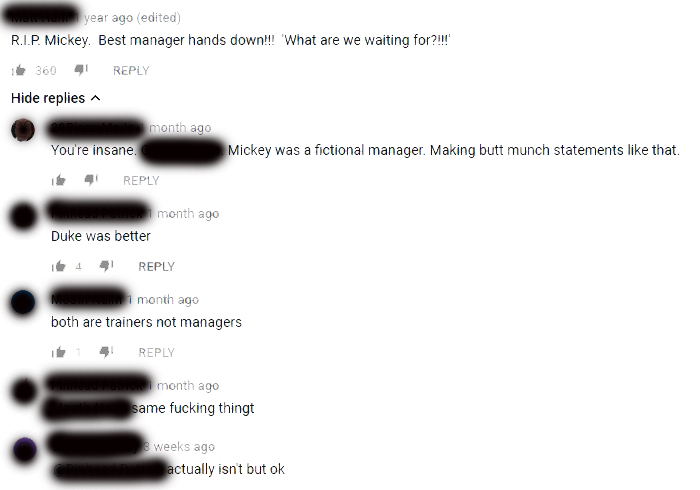 As you can see, it starts off fairly nondescript with somebody being a smartarse and disputing the original comment because they decided to take it as literally as possible and combine the worlds of real-life sports trainers and their fictional movie counterparts. Then the opinion is put forward that Duke (Apollo’s trainer) was in fact superior to Mickey – a fair enough opinion (even if it is presented as a fact). Then, enter the Pedant archtype who isn’t happy that people casually discussing a movie have committed the cardinal sin of confusing managers with trainers.

I’d ask if this was really that necessary or how we made it from the manager/trainer discussion to suicide but I can’t seem to find a suitable collection of words so I’ll let this classic meme do the talking while I gather myself.

And so it continued…

I would attempt to commentate on this conclusion to the discussion but I don’t think I need to. For the purposes of re-capping however: a Rocky II clip inspired a conflict of opinions on trainers and managers. Said conflict then evolved into a not-so-subtle suggestion that one of the involved parties should go and hang themselves (as you do for confusing trainers with managers, real life trainers with Rocky trainers or for being a Duke fan). Finally, a good ol’ race-fuelled argument.

As I said, this is a very tame example. So tame in fact that it barely registers. Many other furious debates succeed in racking up hundreds of replies and utterly vile on-screen words that sometimes defy belief. Some may argue that I should “grow up” or just accept that this is life in 2019 but I refuse to accept that. The fact is, you don’t hear people speak this way in the real world. They are keyboard warrior trolls on a power-trip, safe behind their monitors or smartphone displays. Let’s see them stand face-to-face with a grown man in the street and tell them to go hang themselves for holding the opinion that Megadeth is better than Iron Maiden. Most of us swear and rib our mates about their opinions but it’s done with humour and an understanding of the boundaries. We know who we can share black humour or crude jokes with for example. 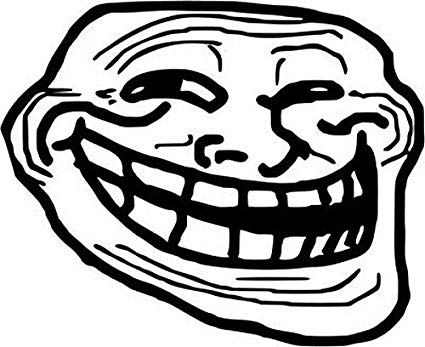 It’s over-compensation and feeling powerful by putting others down magnified ten-fold (at a minimum). Trolls and keyboard warriors on Youtube (and most other social networks for that matter) come in two varieties: the first species is neaderthal in nature and not yet in possession of an imagination. Hard-hitting, punchy insults and childlike tantrums punctuated by words such as “fuck” and “cunt” are their only form of response to anybody who dares challenge their hard-man act. Ironically, it’s these types – who seem the most ghastly and repulsive at first – who probably have the most hope of transitioning to a regular human being. A slim hope mind, slimmer than the gap that the Millenium Falcon squeezes out of after attacking the Death Star II’s core in Return of the Jedi. It’s the second species of troll that you have to be more wary of.

Passive-aggressive prose and carefully constructed replies designed to poke and prod at another is their style. Rather than going in fists-swinging with their digital mouth vomiting out swears, these social rejects get their thrills by laying the bait and toying with the fish they manage to hook. Accomplished grammar, a calm persona and the ability to respond to anything are other hallmarks to look out for. These are the sorts of trolls who refuse to let their opponent claim the last say and achieve a trouser tent by retrieving facts and figures to discredit another viewpoint or working out how to push another’s buttons. You can imagine them sitting back with a wide, toad-like grin as they watch somebody else unravel and if all else fails, they have no qualms about signing off with an ice-cold, passionless put-down.

Read too much of this crap and you begin to wonder if these people have a life outside of the internet or how awful their own existence must be if they need to throw their self-respect beneath a dumpster and communicate with others in a such a revolting manner. More to the point of this topic’s title, it’s embarassing that this is a representation of us, the human race. What happened to agreeing to disagree and accepting that not everybody holds the same opinions as us? Somewhere along the line, it became essential to always be right (a mathematical impossibility in itself) and fling insults around like uncivilised apes slinging turds. Somebody disagree with your outlook? No problem; just tell them to jump off a bridge (while promising that you will be banging their mother as they plummet to their doom).

But then again, I’ve just written a big blog post about morons and wasted some of my life analysing their motives so what the fuck do I know.