I’ve ran out of new books at the moment and so every printed word I have been ingesting of late has tasted very familiar. In normal, non-smartass speak, I have been revisiting some of the stuff in my collection and the latest is Stephen King’s The Eyes of the Dragon.  This is one of my favourite Stephen King books of all-time and I may be in the minority when I say that as the book has always felt like a second tier King book to me; one of his lesser known or celebrated works. It’s understandable. After all, Eyes doesn’t have the iconic rep of the likes of Carrie, Cujo or The Shining and it isn’t a big fat epic in the vein of The Stand, IT or 11.22.63.

It’s also a fantasy story and one of very few that King has ever written, certainly the only one that goes for a medievil, sword-and-sorcery-inspired fantasy setting. It certainly stands out from his typical horror and sci-fi styled works.

The Eyes of the Dragon doesn’t have the same rich depth and exhaustive world detailing that the likes of The Lord of the Rings or A Song of Ice and Fire possess but nonetheless, this is still classic King and the book’s world comes alive in your mind’s eye with little effort as a result. It’s no classic of the fantasy genre but this is missing the point because Eyes is all about one thing as far as I am concerned.

King’s infamous villain is central to this book’s plot and – outside of The Stand and The Dark Tower – is his most major role which makes The Eyes of the Dragon‘s “lesser” status in Stephen King’s back catalogue even more of a shame. Here, Flagg is a sorcerer and advisor to the King of Delain, plotting chaos, anarchy and destruction through intelligent manipulation and deception. He poisons the King and successfully convinces everybody that his son, Peter, is the culprit. Flagg is afraid of Peter’s good-hearted nature, strong will and keen perception – traits that would make it impossible for Flagg to maintain his toxic influence over the throne and to put his plans for Delain into action. With Peter safely imprisoned for a murder he didn’t commit, his younger brother Thomas inherits the throne. Thomas is a bitter boy with far less wits about him who relies on Flagg completely to make decisions and be a King. Thus it is Flagg who rules Delain through Thomas, finally having his opportunity to begin unleashing darkness on the people.

Flagg is a very popular villain in the Stephen King “universe” and that’s because he is just so well-written and a joy to read despite his utterly evil intentions.

“Do you think it strange that Flagg would know something about Thomas that Thomas didn’t know about himself? It really isn’t strange at all. People’s minds, particularly the minds of children, are like wells – deep wells full of sweet water. And sometimes, when a particular thought is too unpleasant to bear, the person who has that thought will lock it into a heavy box and throw it into that well. He listens for the splash…and then the box is gone. Except it is not, of course. Not really. Flagg, being very old and wise, as well as very wicked, knew that even the deepest well has a bottom, and just because a thing is out of sight doesn’t mean it is gone. It is still there, resting at the bottom. And he knew that the caskets those evil, frightening ideas are buried in may rot and the nastiness inside may leak out after awhile and poison the water…and when the well of the mind is poisoned, we call the result insanity”

“Thomas said nothing, but Flagg had been well pleased. He saw that Tommy was thinking about it, all right, and he judged that another of those poisoned caskets was tumbling down into the well of Thomas’ mind – ker-splash! And that was indeed so”

Flagg should be an utterly one-dimensional villain. He is, after all, pure evil without a shred of goodness within, flying in the face of the concept of balance which says that nobody can ever be one-hundred percent good or evil. Flagg is disease and plague personified; a malevolent demon in human form who lives to destroy, ignite apocalyptic anarchy and incite mass bloodshed – all for his own entertainment. As rotten as Flagg is however, King writes him in such a playful manner that you can’t help but like him. Reading this book again makes me sad for this style of Stephen King story which we rarely receive anymore outside of short story collections. True, Flagg made a brief appearance in the recent Gwendy’s Button Box (as the enigmatic Richard Farris) but I’d love to see this incarnation of Flagg again, the age-defying evil wizard who lives for mischief and the promotion of woe.

Dark Tower fans should also read The Eyes of the Dragon as I believe there is a reference to Delain and some of the characters there (linked to the ending of Eyes which I won’t spoil here). Those are some of the extremely few Stephen King books that I have yet to get around to unfortunately, aside from the first installment which I read many years ago. 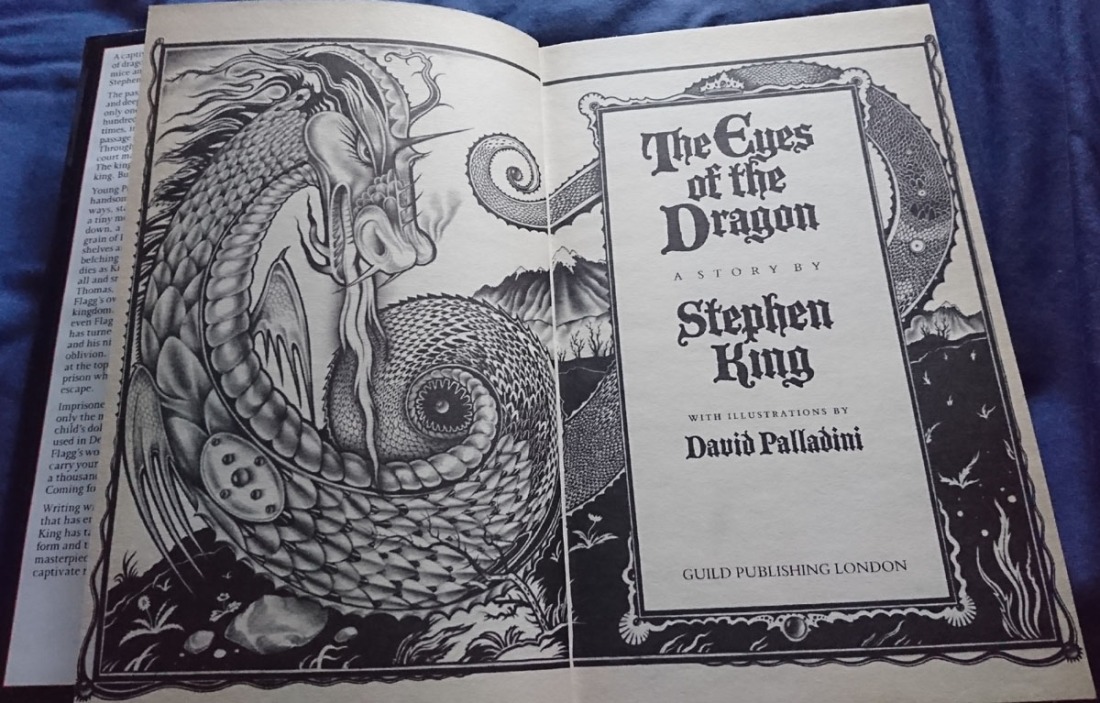 Lastly, there are also some lovely medievil-style illustrations by David Palladini in this first edition hardback copy I have. I can’t confirm whether or not these have survived for subsequent paperback imprints but I would hope so.

In conclusion, I have really enjoyed revisiting The Eyes of the Dragon. In truth, I did wonder whether or not I had recalled it with rose-tinted specs and was apprehensive about reading it again in case I didn’t rate is as highly second time around. Happily, I had the opposite reaction and enjoyed it even more. There are some real gems in Stephen King’s 1980’s and 90’s back catalogue that often get overshadowed by the more well-known books and this is certainly one of them. Give it a try.