I don’t particularly like doing Top Fives anymore because I genuinely believe that such countdowns are lazy and cheap ways of pumping out content. Sometimes however, you just want a greasy, fatty take-out meal over a proper dining experience. Or perhaps you find your eyes drawn to the woman in the tracksuit rather than the glammed-up lady in the stunning evening dress. Awful analogies aside, I am going to be cheap today and do a Top Five.

If you read my review on Peter Swanson’s The Kind Worth Killing, you may be aware that am finally branching out into the works of authors other than Stephen King. With this in mind, I decided that I would share my five favourite King books since I have read almost every one by this point. I’m not done with Stephen King at all but it’s time for a break and time to broaden my horizons when it comes to fiction.

There’s no order to this list by the way; these are the five that I enjoyed the most and have read several times as a result. 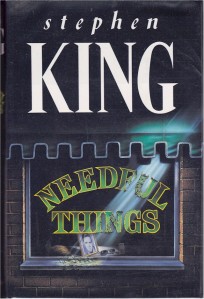 Needful Things was supposed to the “end” of King’s fictional town of Castle Rock and the book’s conclusion certainly supported that promise. However, the author has recently returned to the ‘Rock with Elevation and Gwendy’s Button Box (the latter set in the past to be fair) so who knows. Regardless, this book follows my favourite Stephen King formula: richly-detailed small town life from the perspectives of multiple characters. The reader gets to know the various characters (plus their deepest secrets) before all paths finally cross for a dramatic finale. Central to the story is the evil Leland Gaunt and his shop, the titular ‘Needful Things’. Gaunt exploits the desires and fears of the townspeople to turn everybody against one another and incite destruction and chaos. The way he masterfully manipulates the residents makes for excellent reading and the dark playfulness of his sinister antics is a joy to witness. For me, Gaunt is up there with Randall Flagg as one of the best villains in a Stephen King book. As for Needful Things as a whole, it represents the ‘old’ style of Stephen King where the pieces (in this case, the people) are carefully and lovingly crafted before a giant fist is slammed against the playing board, upsetting everything as the plot threads converge. It’s a real shame that this style of King storytelling isn’t as frequent anymore but 2017’s Sleeping Beauties (co-written with son, Owen King) was at least very reminiscent of these types of book. 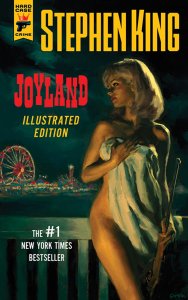 I haven’t reviewed Joyland here on Unfiltered Opinion but I did review it over on my other blog back when I thought it was a good idea to add variety to a videogame-focused blog by talking about books and B-Movies (spoilers: I quickly regretted the idea). You can find the complete review here but I will quote a portion of my own words here to summarise Joyland.

“The story is short but powerful and contains a small splash of the supernatural but is largely grounded in reality and tells the story of Devin Jones, a young college student who takes a summer job at a carnival-style amusement park called Joyland. It is there that he meets new friends, has new experiences and tries to move on from the first girl to break his heart. There is a central plot strand running through Joyland that focuses on a series of unsolved, heartless murders – the last one occuring at Joyland – that Devin finds himself investigating but this isn’t really the main premise of the book.

Joyland is actually a story about love, being young and foolish and growing up. We’ve all been there at Devin’s age and through his eyes I was able to recall my own similar experiences, thoughts and heartache. I found that I really cared about the characters in this book – Devin especially – and wanted the best ending for them but as we know from real life, the ideal isn’t always possible and our naive, young selves have to learn these lessons along the road.”

I didn’t know what to expect from a Stephen King book with a pulp-style cover published under the Hard Case Crime label but it turned out to be one of the best ones I have read thus earning it a place on this list. Usually it’s the more monolithic epics that I can’t get enough of but Joyland proved that small can be beautiful when it’s perfectly formed.

Being a fan of cars and classic steel in particular, I was always going to be drawn to a book that revolved around a car. The fact that Christine is an evil, sentient killer car was the icing on the cake. The basic plot of a car coming to life and murdering people sounds dumb and comical, almost like something you’d have read in a Goosebumps book as a kid but Christine is so much more than that. While it’s true that the book IS about the car, the bulk of the storytelling revolves around the nerdy, unpopular Arnie Cunningham who buys Christine – a derelict ’58 Plymouth Fury – and gradually falls under the car’s evil spell. Arnie’s personality slowly morphs into that of the car’s previous owner, the unsavoury Roland LeBay, and he transforms from an awkward highschool loser into an angry, bitter and unpleasant young man in a symbiotic relationship with his car. Everybody around Arnie is inevitably drawn into the swirling vortex of evil radiating from Arnie, Christine and their pooled “unending fury”. The book is just so well-written and you can’t help but love the characters – both the good and bad – and there is a nostalgic throwback to teenage life in the 70’s. Christine is one of Stephen King’s oldest works but remains a solid favourite of mine.

[side note: the John Carpenter movie adaptation is well worth checking out. It cuts a lot of the detail from the book (as you’d expect) and changes a few scenes but overall, it is an authentic representation of the characters and the tone of the book] 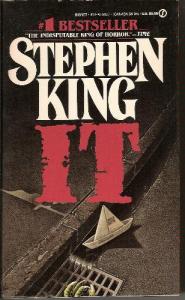 Where do you do begin with this enormous book? IT is probably more well known for its two big-screen adaptations and Tim Curry’s famous performance as the evil clown, Pennywise. The original book however is the best as far as I am concerned. It focuses on a group of friends from the recurring town of Derry and flicks between their childhood years and the present where they, as adults, return to Derry to finish the battle with the evil that they fought once before as children. The genius of IT (as I saw it anyway) was that you got the superlative, almost gratuitous descriptive writing of King, supernatural horror and the perspectives of children and their concept of fear – all in one tale. Viewing the world through the eyes of the characters as children brings back a lot of memories of how we probably saw the world and our fears as minors – hence Pennywise the clown. Some have criticised the book’s finale for losing the plot completely and it’s easy to see why that might be. The evil infecting Derry takes the form of a giant spider in the sewers beneath the town and defeating it the first time involved the children all having sex with the only female member of their gang (really). For me though, IT is one of the best of Stephen King’s sprawling epics, up there with The Stand and Under The Dome. As a bonus, there is a very brief blink-and-you’ll-miss-it implied cameo from Christine.

I reviewed this book here on Unfiltered Opinion not too long ago after reading it for the second time. I recalled being pleasantly surprised with The Eyes of the Dragon the first time around purely because it was further below the radar than most big-hitting Stephen King books and yet I enjoyed it immensely. I expected a cooler response to it the second time around but found myself surprised again. It turned out that I liked it even more despite all of the excellent Stephen King books I had read since my first journey to Delain and the sinister mechanations of the evil sorcerer, Randall Flagg. This is one of the few examples of Stephen King doing fantasy in a classic medievil-style setting but perhaps he should have ventured there more often because Eyes is simply fantastic. Most of the book’s appeal stems from the villainous Flagg and how King writes him. To quote my own review of the book…

“King’s infamous villain is central to this book’s plot and – outside of The Stand and The Dark Tower – is his most major role which makes The Eyes of the Dragon‘s “lesser” status in Stephen King’s back catalogue even more of a shame. Here, Flagg is a sorcerer and advisor to the King of Delain, plotting chaos, anarchy and destruction through intelligent manipulation and deception. He poisons the King and successfully convinces everybody that his son, Peter, is the culprit. Flagg is afraid of Peter’s good-hearted nature, strong will and keen perception – traits that would make it impossible for Flagg to maintain his toxic influence over the throne and to put his plans for Delain into action. With Peter safely imprisoned for a murder he didn’t commit, his younger brother Thomas inherits the throne. Thomas is a bitter boy with far less wits about him who relies on Flagg completely to make decisions and be a King. Thus it is Flagg who rules Delain through Thomas, finally having his opportunity to begin unleashing darkness on the people.

Flagg should be an utterly one-dimensional villain. He is, after all, pure evil without a shred of goodness within, flying in the face of the concept of balance which says that nobody can ever be one-hundred percent good or evil. Flagg is disease and plague personified; a malevolent demon in human form who lives to destroy, ignite apocalyptic anarchy and incite mass bloodshed – all for his own entertainment. As rotten as Flagg is however, King writes him in such a playful manner that you can’t help but like him.”

I feel that this is the wildcard of my Top Five; a book that shouldn’t be here ahead of certain other big names from King’s back catalogue but it is impossible for me to deny my adoration for Eyes of the Dragon so here it is.

Ten other books from Stephen King that came very close to making my Top Five.