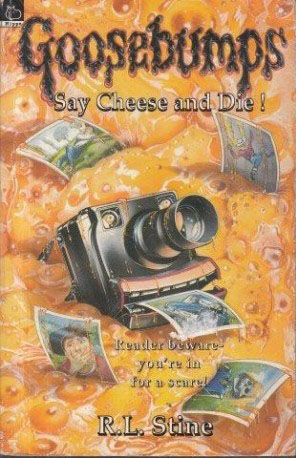 In a previous post entitled “My Reading Journey“, I mentioned my complete set of the original Goosebumps books by R.L. Stine. Well, when taking them all out for a quick photograph for that post, I decided it might be fun to re-visit them all with adult eyes. There’s only 62 to get through…

I’ve always considered Say Cheese and Die! to be one of the more iconic Goosebumps books. It has a cool name and a pretty original premise for starters. Also, I’m guessing that Stine liked this one as well because this is one of only a handful of Goosebumps books to receive a sequel (though we would have to wait some time for it).

Greg and his friends think it’s pretty cool when they find an old camera in a derelict house, and it works. But the camera takes weird photos – like the one of Greg’s dad’s new car – totally wrecked? Then his dad is in a bad car accident – what’s going on?

And when Greg takes a picture of his friend Shari, she’s not in the photo when it develops – then Shari disappears altogether. Now Greg knows for sure that the camera is creepy – more than that, it’s evil.

Greg and his friends – Shari, Michael and Bird – are bored. Obviously, when kids are bored, the solution is to break into an abandoned house in the neighbourhood. A derelict house that just happens to sit in the darkness of enormous oak trees and have a reputation for ghastly goings-on. Of course. No wonder youth crime is often linked to being at a loose end. Perhaps kids were actually inspired by Say Cheese and Die! back in the day?

Anyway, Greg finds the polaroid camera hidden in a secret compartment and decides to take it which turns out to be a very bad idea in the long run. The first sign of the camera’s powers comes when Greg takes a picture of Michael and the polaroid develops to show Michael plunging through crumbling staircase railings…an accident which occurs moments later. The reader immediately knows the score but nobody else believes Greg’s suspicions, even when the camera continues to predict nasty accidents. Shari shows up as invisible then disappears inexplicably. Bird is pictured having a horrible baseball accident and this too comes to pass.

One thing that struck me was how stupid the characters are in this book. Naturally, it would be a stretch to believe that a camera could prophesise and even cause sinister things to happen but even so, the evidence is there for everybody to see. Yet, even after woe befalls Michael, Bird and Greg’s father, Shari demands that Greg bring the camera to her birthday party because the weird photos it prints are fun. Greg initially refuses but Shari hounds him relentlessly until her friend caves and agrees to bring it, despite knowing that something bad is bound to happen…

With a loud sigh, he pulled the camera from its hiding place in his headboard. “It’s Shari’s birthday, after all” he said aloud to himself.

I can’t speak for anybody else but if I had a magical, evil camera that I had solid reason to believe could cause accidents, I certainly wouldn’t relent and agree to take it to a party for such a silly reason! We’ll let Greg off here because he IS a kid but that habit of giving in to the demands of bossy girls is going to land him in trouble one day.

That said, bad decisions and naivete are a staple of the Goosebumps books as we will continue to see going forward with this review series. That along with misleading chapter cliffhanger “scares” and the dismissal of kids’ fears by the adults are what get the likes of Say Cheese and Die! past the hundred-page count in the first place.

The big question in this book of course is that of the camera’s origins. It turns out that an evil scientist who enjoyed dabbling in black magic placed a curse on the camera when his partner tried to steal it from him. Somehow, this imbued the camera with the power to steal the souls’ of those it captures on film. It’s all a bit vague and convenient really. Furthermore, you have to wonder how nobody’s souls were actually eaten in all of this. The only person who disappeared completely was Shari but Greg (accidentally) manages to restore her by tearing up her photo. Overall, not a lot is explained but to expect much more from a children’s horror book would be ambitious anyway. Say Cheese and Die! is a fun story with an idea that could be expanded on for – say – a more grown-up horror movie. Perhaps it has and I’ve missed it?

This time, we have the camera itself and various photos of the accidents from the story sinking into the orange Goosebumps sludge. The camera looks fantastic and creepy as fuck with a grinning face incorporated into the design. One thing I want to point out is the bottom-right photograph of a skeleton woman – a random photograph that doesn’t actually relate to anything in the book.

Honestly, nothing stood out to me as “dated” in Say Cheese and Die! so Stine inadvertedly succeeded in future-proofing this one. That said, the car that Greg’s dad proudly brings home is a brand-new Ford Taurus. Ford axed the Taurus earlier this year so perhaps the book will feel a little bit more dated in a few years time…

Pretty high. As I said at the start of this review, I’ve always felt that this is one of the more iconic Goosebumps books and it reads pretty well, even as an adult.

Up Next: Stay Out of the Basement