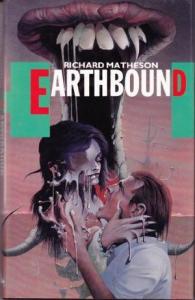 Note: Earthbound’s release should technically be dated 1982. However, Matheson attached the pen name of Logan Swanson to the original version after publisher Playboy Press “severely” edited (source: wikipedia) the original manuscript. As far as I can tell, it wasn’t until the 1989 re-release that Earthbound was published unaltered with Matheson’s name on the cover hence why I am using that date for this review.

Last year, I made a vow to spread my wings and step further afield when it came to the fiction I consumed and the authors who wrote it. This was right after reading Stephen King’s non-fiction book, Danse Macabre, in which the famous writer explores the subject of horror, what makes it tick and – more importantly – the writers and works of fiction that inspired him. I jotted down a list of titles, recommended by King, that I wanted to investigate. And yes, I totally appreciate the irony in compiling a more varied reading wishlist using the recommendations of the author that I have stuck too close to over the years.

Earthbound by Richard Matheson is the first book that I have crossed off that list. I have to confess that, despite being an avid reader, I hadn’t heard of Matheson before purposely seeking out Earthbound. I guess that’s proof of how little I have actually dipped my toes below the surface of horror’s waters.

As such, I was unfamiliar with the author’s writing style. Regardless, this is a review and so I can only offer my honest opinion based on my experience with the book and what I got out of it.

It was a book of two halves and a slow-burner to begin with. David and Ellen Cooper have gone away to an isolated beachside cottage at Logan Beach, the place where they spent their first honeymoon over twenty years ago. Unfortunately, Logan Beach and the cottage in particular have become quite rundown and ramshackle in the intervening years and the icy cold temperature that permeates the building is highly uncomfortable. The couple put up with the dilapidation and unfavourable cold however because they are there to try and rekindle their ailing marriage.

Not much is initially explained on the marriage breakdown front but it is hinted that David has had an affair in the recent past and that their marriage is on the rocks as a result. It’s this section of the book that is the slow-burner. The conversation between David and Ellen is fairly flat, their background is only gently alluded to and quite honestly, I didn’t find either character that interesting. What’s more, there are precious little scene changes and so you – the reader – feel stuck in the depressed cottage with these two characters that aren’t exactly thrilling to be around. Once I’d finished this book, I DID appreciate that David and Ellen were just very normal, boring but flawed people and that, perhaps, this was a quality of the writing and not necessarily a detraction. But without that hindsight, Earthbound initially felt lacking in depth and pizzazz.

Until Marianna shows up.

The mysterious Marianna arrives at the door while Ellen is out and David is on his own. She is young and shockingly beautiful to David, who is immediately bewitched.

When she looked back at him, David felt the drawing tingle in his flesh again, stronger than ever now. It was almost unbelievable that any woman could be so lovely. He stared at her, imprisoned by her beauty.

Straight away, during the first few pages of Marianna’s presence in the book, you can tell that the tendrils of obsession are beginning to wrap about David. Matheson uses some powerful language and descriptives here and I had no trouble believing in Marianna’s intense beauty and the affect that she was having on unwitting David.

With an impotent shudder, David slid both arms around her and she fell against him, lips, hungrily, at his again. He pulled her violently to himself, the pressure of her jutting breasts arousing him still further. Suddenly, Marianna jerked his right arm free and, twisting slightly to the side, lifted his hand to her left breast. David cupped his palm across the thrusting cone and started fondling and massaging it, feeling through the sweater, how its nipple hardened at his touch. Marianna licked his lips tempestuously. She raked her teeth across his cheek, her breath like spilling fire on his skin. “Anything!” she whispered in his ear.

Drawing back, eyes never leaving his, she tugged the sweater up across her head and slung it aside; David tightened at the prominence of her bust as she turned her back to him. “Quickly, darling.” His fingers trembled as he picked the four hooks from their eyes. The brassiere ends sprang apart and Marianna shucked it into his lap. “Hands,” she muttered. David held them out, numb and shaking, and she clutched them to the pendant arching of her breasts, hissing through her teeth, eyes hooded as he dug his fingers into them. “More,” she said. Gasping, David dropped his head and started kissing them. He ran his tongue across the large, stiffened nipples and she pulled him savagely against herself, a frenzied moaning in her throat. “Feed,” she said. Her back went rigid as he began to suckle her. “Bite me, hurt me.” Her hands were clutching at his head like talons of steel. “Take them,” she ordered. “They’re yours, yours!”

Between Marianna’s sudden, inexplicable appearances, her lustful interest in a forty two year-old married man that she just met and the furious, animal-like sex that she is only too willing to initiate, it is clear that there is something not right about her. Furthermore, David wakes the next morning to feel utterly drained of energy and not necessarily due to the night’s physical efforts. You begin to wonder if Marianna is a succubus or some form of sexual vampire.

The rest of the book – without going into any more spoilers – is David gradually losing his mind as Marianna continues to visit and his obsession spirals out of control, as does the sensation of being sucked dry (no dirty pun intended…). He and Ellen argue and an internal war rages within as David grapples with what he knows is right and the delicious, gratifying wrong that Marianna has poisoned his well with. He wants – needs – Marianna and his lust for her is all-powerful. At the same time, he is desperate to escape the cottage and get away before it is too late.

Unfortunately, it IS too late once the horrifying, supernatural truth about the enigmatic Marianna is revealed. Fortunately for the reader however, this is where the book kicks into overdrive and everything comes to a wild head. If Earthbound had been a slow-burner before, peppered with flat spots and dull dialogue, the endgame more than makes up for it. Seriously, it comes from nowhere and is a chaotic rush of madness and plot twists.

As I have no doubt suggested, I didn’t immediately take to Earthbound with much enthusiasm but by the time I reached the book’s conclusion, I was left a little breathless by the sudden rush of events. In fact, it made me look back at the book as a whole and realise that the dull bits were just part of the suspense. I think I was expecting straight-up horror but while Earthbound certainly has that, it is more of a psyhological story. The description of David’s mind and thoughts as he slowly drowns in his obsession for Marianna for example is rich and almost disturbing.

Thing is though, I think most of us can relate to being obsessed with another person that we are infatuated with on a near-toxic, unhealthy level. We know it is senseless and irrational with no chance of a happy, wholesome ending. I know I certainly can and I was reminded of the dark time in my life when I’m ashamed to admit that I was a slave to a woman’s beauty, my mind akin to a runaway minecart. And while my own experiences pale drastically next to the supernatural forces and savage sex that David Cooper faces in Earthbound, I still saw murky reflections there. It made me feel a touch uncomfortable about myself as a human being and a man and that is, in my opinion, REAL horror that hits harder than any OTT gore or monsters could ever hope to.

My overall feeling about Earthbound is that it is a book that probably needs a second read-through in order to fully appreciate. I think being pre-armed with pre-existing knowledge of the characters (rather than being frustrated by the lack of explanation and scant characterisation of David and Ellen early on) would help the reader enjoy the suspense and pyschological aspects of the book that much more.