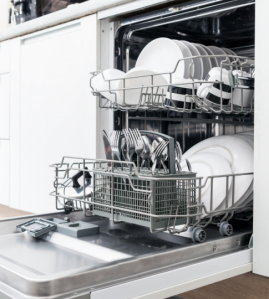 I know, right? An extremely random topic to concoct a post on (even for this blog) but hear me out. This might well be a public service announcement of sorts.

Or I’m chatting a load of bollocks and you will continue to rely on your dishwasher.

If there’s one kitchen-based chore that everybody dreads having to do and will avoid at all costs, it’s emptying the dishwasher. That’s the situation in our house at least. And it got me thinking: why do we put ourselves through it? Why do we knowingly and willingly load up these appliances with our dirty dishes, leave it to do its thing and then huff and puff our way into the kitchen late in the evening to FINALLY empty the damn thing lest the cupboards run dry of essentials such as plates and glasses?

For many women, it’s to avoid the sink and the effect on their hands that repeated washing-up sessions can have over a period of time. For men such as myself, I think it’s laziness. We don’t want to wash up. Have you seen the average single male’s abode? But women can wear rubber gloves to (mostly) protect their hands. As for us blokes? We need to stop being so damn lazy and pitch in – just get the job done. We aren’t beneath cleaning up after a meal.

The REAL reason that a dishwasher is so appealing is the convenience. There’s no standing at the sink, scrubbing pans or plates. You just load it up throughout the day, kick back while it does all of the cleaning for you and then empty it later. I get that; I really do. But the thing about convenience is that it rarely benefits you in the long term; it’s all about the instant gratification and relief at avoiding work. Convenience food for example is tasty as fuck but it’s bad for you in regular doses and gets you out of prepping a proper meal.

But convenience is what we seem to be all about these days. Dishwashers used to be a luxury appliance but now they are a standard feature of a kitchen. Heaven forbid it breaks down though (more on that in a moment) and you have to remember how to wash up in the sink. For some people, this is a genuine disaster. My father is an appliance engineer and has dealt with customers who are complaining that the dishes are piling up by the sink because the dishwasher is broken and they can’t cope. You feel like giving these people a good smack in the face and instructing them to just deal with it. Surely they won’t die from having to temporarily revert to ye olden days of using a scrubbing brush or sponge in the sink?

But back to convenience. When you are merrily filling the dishwasher up with the remains of your breakfast, lunch and dinner (‘Tea’ to us Brits), do you know what you are actually doing? You are delaying the inevitable and just postponing the work – not eradicating it altogether. It reminds me of a quote from Terminator 3:

“You only postponed it. Judgment Day is inevitable.”

So you’ve been avoiding the washing-up all day but there’s no escape from having to empty an absolutely loaded dishwasher.

It’s far faster to simply wash up after each meal. There’s less to clean if you do it that way and it takes a matter of minutes to get it done.

Plus you are saving money. A dishwasher is more than just an initial outlay of cash, remember. You have to buy tablets, rinse aid and salt. It becomes yet another object of constant maintenance in your home – another ongoing cost that never ends. And when it breaks down (which it will), it will cost more money to repair or – worst case scenario – replace altogether. Old-school dishwashers didn’t suffer so much in this respect as they were built to last but the current stuff is cheaply-engineered crap designed to satisfy rampant consumerism that demands everything NOW at bargain basement prices. You will get what you pay for and there’s no way your dishwasher will last fifteen or twenty years like your parents’ might have done.

This cost factor is probably the biggest issue here because you don’t really need a dishwasher do you? But those tablets and bottles of rinse aid all add up over time. A 60-pack of Finish tablets is currently £9.00 on the ASDA UK website for example. Let’s say that you put the washer on once a day (it could even be more) and that’s six packs that you will need to buy over the course of a year, totalling £54.00. Over five years, that’s £270.00. £540.00 over a decade. Obviously, prices go up and down and there are different brands available blah, blah, blah but that’s a lot of money to avoid washing up by hand and we haven’t even factored in rinse aid, the initial purchase price, repair costs or even how many dishwasher units you would have had to buy during that ten-year span. And yes, you could also point out that our lives are loaded with such compounding costs and you would be correct. But we really should look to eliminate as many as possible if we want more money in our wallets to do better and more enjoyable things with.

My point is this: for the sake of washing up a few plates, glasses and mugs after each meal, you can save yourself a load of money and hassle. In my eyes, it’s a no-brainer but maybe I’ve just over-thought this. But the next time you are moaning about emptying the dishwasher or arguing over who should do it, just remember that convenience is a double-edged sword.