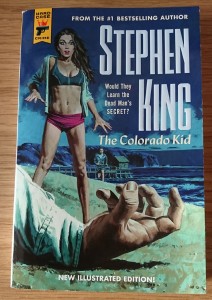 On an island off the coast of Maine, a man is found dead. There’s no identification on the body. Only the dogged work of a pair of local newspapermen and a graduate student in forensics turns up any clues, and it’s more than a year before the man is identified.

And that’s just the beginning of the mystery. Because the more they learn about the man and the baffling circumstances of his death, the less they understand. Was it an impossible crime? Or something stranger still…?

I missed The Colorado Kid the first time around and according to the introduction by Hard Case Crime’s Charles Ardai, it’s no wonder. The book was apparently out of print for a decade or more prior to this fresh 2019 Illustrated Edition. Out of interest, I took a look on ebay for one of the original editions and for a used paperback, they’re pretty expensive. And listed as “RARE”…of course.

Anyway, this is going to have to be a short review because The Colorado Kid is one of those stories that is difficult to talk about without spoiling but I will do my best. It’s a mystery story centred on the strange, unexplained death of a man in 1980. His body is found slumped against a bin on Hammock Beach, on the small island of Moose-Lookit, just off the Maine coast. There are no witnesses and nobody knows who he is. A probable cause of death IS established but beyond that, a lot of unanswered questions remained. Who was he? Why did he come to Moose-Lookit?

Fast-forward to the present day and twenty-two year-old Stephanie McCann is working a newspaper internship at The Weekly Islander, Moose-Lookit’s tiny paper company. The company is ran by just two men: Vince Teague, 90, and Dave Bowie, 65. As well as running the island’s sole newspaper, the men were also involved in investigating the msyterious death of the “Colorado Kid” back in ’80. You see, once a likely cause of death had been estblished, the authorities weren’t very interested in digging any deeper so Vince and Dave took it upon themselves to try and solve the confounding mystery.

This story is recounted to Stephanie by Vince and Dave and that’s essentially what The Colorado Kid is – these three main characters sitting in The Weekly Islander’s office and talking. If that sounds dull then just remember which author’s name is emblazoned on the book’s cover. Despite the fact that there is no action, danger or shift of location, I still found myself enjoying the company of Vince, Dave and Steffie. It’s one of those books that immediately feels warming and homely and I think it’s impossible not to feel like you’re sitting in with friends as Vince and Dave share the puzzling story with their young intern.

The mystery itself is also fascinating and the book was a real page-turner that I couldn’t help but tear through, partly due to that aforementioned cosiness and partly because of the twists and turns in the Vince and Dave’s story that kept me guessing right until the end. The Colorado Kid is just so easy to read but, despite its rapid pace, there is still ample depth and characterisation – enough for you to build up a picture of small-town life on an island community, even when the story has one foot in the past and one in the present. That’s just classic King and – as has been proved over and over – a shorter story isn’t immune to his vivid world-building.

The only downside is the book’s ending because after devouring a mystery story, the reader naturally expects a satisfying conclusion. You might not get that here and from what I have read, The Colorado Kid does have a reputation for being a bit of a marmite book. You’ll either love it or you’ll hate it but you won’t reach that decision until the very last page.

Personally, I didn’t love the book’s conclusion but I also didn’t hate it. It was just something different that didn’t play by the established rules of how a story “should” wrap up in the traditional sense. It was well worth a read though, purely for the likable characters and the way in which the story was told. There was also a blink-and-you’ll-miss-it reference to Stephen King’s other Hard Case Crime book, Joyland, which got a smile out of me.

It’s also worth looking at the new cover versus the original because they are both deliciously pulpy but also quite different: 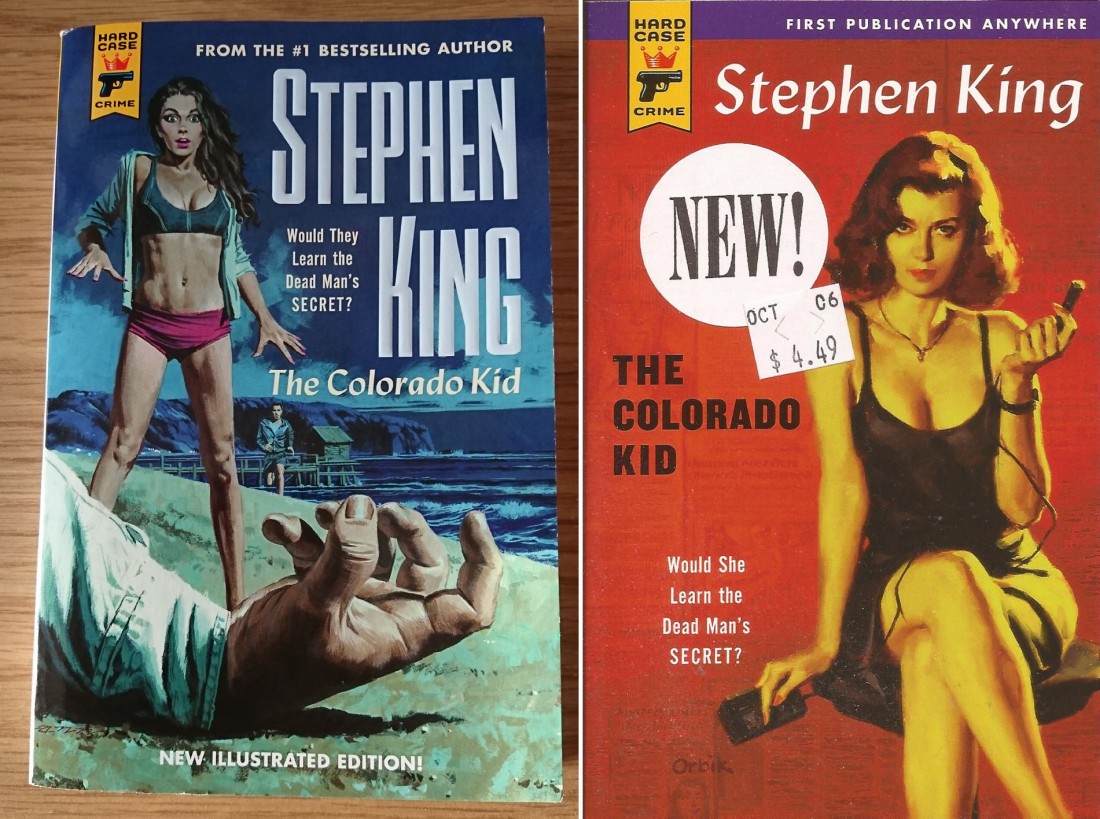 Both are painted throw-backs to the classic pulp covers of old, featuring gorgeous dames in a state of unashamed sexiness. I actually prefer the new version on the left however since the cover is actually relevant to the story. The original (right) is brilliant but has nothing to do with the plot. Nor does the quote of “Would she learn the dead man’s secret?” on the cover…not strictly anyway. It implies that Stephanie herself is investigating the death.

But I won’t get too pedantic over cover art because I really appreciate both. I love old-fashioned pulp-style art so these sorts of ‘tribute’ cover paintings are right up my street.

The new 2019 Illustrated Edition on the left has an additional small edge in the form of the interior illustrations which – again – are very evocative of the hand-drawn, sometimes rough style that books like these used to have in the 50’s.

In closing, The Colorado Kid might not be for everybody solely because of the way it concludes but that shouldn’t take away from how enthralling the journey to that conclusion is. This really is one of those books that you could lose track of time with and finish in one sitting. Plus, now that it has been reprinted and is easy (and much cheaper!) to acquire, there really is no excuse not to give it a shot.