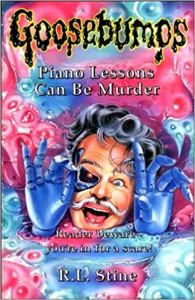 In a previous post entitled “My Reading Journey“, I mentioned my complete set of the original Goosebumps books by R.L. Stine. Well, when taking them all out for a quick photograph for that post, I decided it might be fun to re-visit them all with adult eyes. There’s only 62 to get through…

I think it’s time to hand out an award: a trophy for the most bizarre title to appear on a Goosebumps book. I mean, just what can you expect from a book called “Piano Lessons Can Be Murder”? And let’s just take a moment to appreciate the inclusion of the word ‘Murder’ in the title of a children’s book. I mean, I’m not the sort of person who gives a crap, but I can imagine modern-day publishers perhaps wanting to steer away from using the word ‘Murder’. But then again, I’m not clued-up on current Young Fiction so maybe I’m way off the mark.

Jerry’s all set for piano lessons, especially now he’s got his own piano to practise on. But now he’s met Dr Shreek, his piano teacher, he’s not so sure…

Dr Shreek looks harmless, but there’s something really weird about him that Jerry can’t quite put his finger on. He gives Jerry the creeps…

And then Jerry hears stories about Dr Shreek’s other pupils…who went for a lesson, and were never seen again. But those stories can’t really be true…can they?

As with a great many Goosebumps books, Piano Lessons Can Be Murder opens with a kid moving to a new town and a new house. Jerry, his parents, and their cat, Bonkers (who Jerry absolutely detests) have just moved to the town of New Goshen. Jerry is twelve (again, another Goosebumps staple) and makes the rookie mistake of being a prankster, much to the exasperation of his parents. It’s a rookie mistake because when the old piano in the attic begins to play itself during the night, his parents instantly dismiss Jerry’s claims as his latest prank.

But things get even creepier when the piano is moved downstairs so that Jerry can take lessons. His parents find a local piano tutor called Doctor Shreek (not a sinister name at all…) who has his own piano school in the town. At first, he seems not-at-all-threatening…

Dr Shreek smiled at me. “Hello, Jerry.”
He really did look like Santa Claus, except he had a white moustache and no beard. He had round, red cheeks and a friendly smile, and his blue eyes sort of twinkled as he greeted me.

But Jerry soon hears stories about other kids who have been to the The Shreek School for lessons and were never seen again. Exactly how so many kids can go missing from the same town, and this piano school can stay open when it is the one common denominator in all of these disappearances is a mystery, but perhaps Stine didn’t want his readers to ask that question. Anyway, Jerry continues to have his lessons and notices that the previously non-threatening Dr Shreek has an odd hand fetish…

I muttered thanks. I was surprised to see that his eyes had settled on my hands. “Excellent. Excellent,” he whispered.
I felt a sudden chill.
I think it was the hungry expression on his face.
What’s so special about my hands? I wondered. Why does he like them so much?
It was weird. Definitely weird.
But of course I didn’t know how weird… 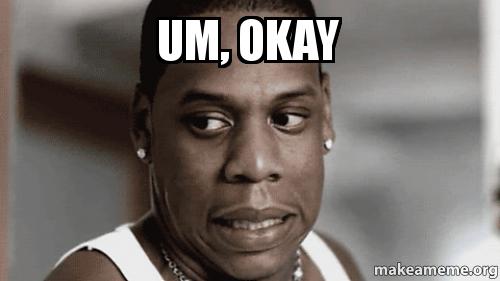 Unfortunately, Jerry isn’t able to recognise the warning signs because he has a supernatural crisis to attend to. That piano that played itself when it was in the attic? Yeah, it’s still playing itself after being moved downstairs. And Jerry’s parents STILL don’t believe him after he sneaks downstairs in the dead of night and sees a friggin’ ghost at the piano, playing away. After several nighttime episodes (where the ghost conveniently vanishes as Jerry’s parents arive), they even send Jerry to see a psychiatrist about his “problem”. See kids, it never plays to be a practical joker that nobody believes. Especially if you live in the pages of a Goosebumps book.

At this point, Piano Lessons Can Be Murder is a reasonably intriguing book. You KNOW that there’s something up with Shreek but there’s also the mystery of the haunted piano which seems to be completely disconnected from the good doctor’s hand obsession and child-swallowing piano school. Where is the danger going to come from?

There’s even time for this hilarious dream sequence that was so ridiculous, I cracked a legitimate smile when reading it…

I tried to stop.
But my hands kept going!
“Stop! Stop!” I screamed down at them in horror.
“Faster! Play faster!” Dr Shreek ordered, his eyes wide with excitement, his face bright red. “The hands are alive!”
“No-please!” Stop!” I called down to my hands. “Stop playing!”
But they really were alive. They wouldn’t stop.
My fingers flew over the keys. A crazy tidal wave of notes flooded the family room.
“Faster! Faster!” the instructor ordered.
And despite my frightened cries to stop, my hands gleefully obeyed him, playing on, faster and faster and faster.
Faster and faster, the music swirled around me.
It’s choking me, I thought, gasping for breath. I can’t breathe.

Find me another book where a character is being suffocated by music. This might be the most ridiculous portion of any Goosebumps book that I have re-visited thus far but at least it was entertaining.

Anyway, Piano Lessons Can Be Murder follows the tried-and-tested Goosebumps formula of hooking the reader before devolving into a ludicrous, rushed mess at the very end. I’m sorry to come out and say that but there it is. If you wanted an intricate and masterfully-crafted conclusion that ties up the plot threads of the haunted piano, Dr Shreek’s hand obsession and the sinister rumours surrounding his school, then you’re going to be let down. This isn’t Charles Dickens or Stephen King, you know.

But just in case…

In the last quarter of the book, we are introduced to Mr Toggle, the caretaker of The Shreek School who also happens to be an inventor, making all kinds of robots and machines…in a piano school.

Jerry then stumbles onto something that neither Toggle nor Shreek wanted him to see: a room full of pianos being played by floating, dismembered hands! It turns out that Toggle really likes beautiful music but, because human hands are apparently so difficult to create artificially, he has to lure promising young talents to the piano school so that he can steal their hands. Oh, and Dr Shreek is a robot, created by Toggle. And the ghost in Jerry’s house? A student of the Shreek school who had her hands taken and – we can only assume – died as a result, as did all of the other missing kids. New Goshen’s police department must either be incredibly inept or incredibly well bribed!

The situation looks bleak for our Jerry but, just before Toggle can harvest his hands too, the ghost from Jerry ‘s house shows up and teams up with the ghosts of all the other murdered kids to swamp Toggle and carry him off screaming into the adjacent woods. Everything I’ve detailed in the last two paragraphs happens in the last ten pages by the way, so there’s all the build up only for another utterly insane Goosebumps resolution to be vomited out at lightspeed.

Overall, I did enjoy Piano Lessons Can Be Murder, regardless of the mental ending. Up until the closing ten to fifteen pages, there is genuine mystery and I didn’t know whether it would be the ghost in Jerry’s house or Dr Shreek that would turn out to be the actual horror. As it happened, it was neither but I’d be lying if I said that the finale was satisfying.

This one is pretty cool, even if it does sort-of give away Shreek’s robotic secret. I love the glowing, red Terminator-style eye and the pink/blue colour scheme of the bubbling slime. And, as ever, the artist’s work is incredibly lifelike.

A twelve year-old willingly taking piano lessons? This always seemed more of an American thing to me so feel free to correct me if I’m wrong and there are still lots of US-based kids who take piano lessons. But just in case, we have another outdated 90’s Nintendo reference in a Goosebumps book to play back-up:

I wondered what Mum and Dad planned to do with all those rooms.
I decided to suggest that one of them be made into a Nintendo room. We could put a widescreen TV in there to play the games on. It would be really great.

For this one, I’m going to have to say that it’s fairly low. I don’t remember reading Piano Lessons Can Be Murder so it might one of the few Goosebumps books that slipped through my net when I was younger.

Up Next: Be Careful What You Wish For