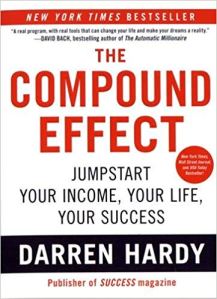 No gimmicks. No hyperbole. No magic bullet. The Compound Effect is based on the principle that decisions shape your destiny. Little, everyday decisions will take you either to the life of success you desire or to disaster by default. Darren Hardy, publisher and editorial director of SUCCESS magazine, presents The Compound Effect, a distillation of the fundamental principles that have guided the most phenomenal achievements in business, relationships, and beyond.

I’m always interested in self-development books, especially if they promise to be something different. The Compound Effect by Darren Hardy did just that so I decided to give it a go.

It’s a good book with some practical ideas but I can’t say that it had the same sort of lasting effect that Mark Manson’s The Subtle Art of Not Giving a F*ck did. I guess I prefer a straight-talking, cut-the-BS book that tells it like it is and forces you to realise and accept uncomfortable truths.

The premise behind The Compound Effect is sound. Hardy explains how positive, constructive actions stack up (or compound) over time and how the opposite is also true when we fill our faces with bad food, waste money on crap or slack off. Realistically, it’s all very basic stuff that we should already know but, to the book’s credit, the so-called ‘Compound Effect’ is illustrated with some particularly eye-opening examples. One that really made me sit up and pay attention was the cost of a $4.00 take-out coffee over an extended period of time. Assuming that you bought one of these on your way to work every week day (so five days), that’s $20.00 a week, $80.00 a month and almost $1,000.00 a year. Over a twenty year period? $51,833.79!

We all know that this is happening. It’s basic maths after all. But the sheer scale is pretty terrifying when it’s laid bare like that. This is Hardy’s Compound Effect in action and the point of the book is to get you to apply this to your own life in order to improve it.

This book is all about building consistency and momentum in your life in order to harness the power of the Compound Effect. It also goes into detail on adjusting the influences in your life (the people you associate with, the news you consume etc.), discovering what your “why” power is and not giving up in the face of adversity.

It’s all positive stuff but I felt that there were a few core points that were being dragged out via endless examples and figures/charts that were a little unnecessary. Also, despite the fact that this book is billed as a way to improve your overall life, it often seemed to be coming from a career/business/money-making angle, assuming that you – the reader – measure your success and self-worth by your status and bank balance. If, like me, you’ve already decided that this isn’t how you are going to define success or happiness, then it could be a deal-breaker.

Also, the book contains some worksheets at the back to use in conjunction with the different exercises that Hardy prescribes. The problem is that these aren’t the full versions and you can only obtain those by getting onto a mailing list at the book’s website. Once I did that, my email inbox was regularly spammed with advertisements for Hardy’s seminars and the like. Don’t get me wrong, I understand that the guy isn’t going to give up his time for nothing (and shouldn’t be expected to) but I would have thought that purchasing a full-price physical book was enough.

The Compound Effect is a decent book with some good ideas and messages that I will certainly take away with me. However, I don’t feel that is does a lot to dig deep into the human psyche and really help you overcome stubborn problems. It’s surface-level positivity that essentially tells you what you need to do but not necessarily how to remove existing mental roadblocks or explain why they are there in the first place.

As with all self-development books, however, this may have a greater impact on you than it did for me, depending on where you are currently at with your life and where you want to go.