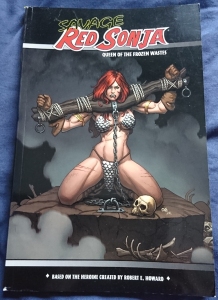 Savage Red Sonja: Queen of the Frozen Wastes delivers an action-packed story and incredible art as Red Sonja, the She-Devil with a Sword battles the beautiful and deadly Ice Queen and her army of Yeti warriors! Under the Frozen Wastes, Sonja will work to lead and army, and restore the broken spirit of the Ice Queen’s human slaves.

Queen of the Frozen Wastes is my first foray into the world of Red Sonja. I have no doubt that there are much better stories starring the She-Devil with a Sword for me to discover but there were a few reasons that I opted for this particular TPB. Chiefly, it was the Frank Cho covers that drew me in. Cho is one my all-time favourite artists when it comes to depictions of powerful yet immensely sexy and voluptuous women, and his style is a perfect fit for an amazonian warrior woman like Sonja who is incredible to behold (with her ever-impractical chainmail bikini) and totally badass.

Secondly, it’s because I’m a cheapskate! I found this book used on ebay for £8 delivered. You can pay two, three or even four times that for a variant cover of a single, newer Red Sonja issue so being able to pick up a TPB, collecting this four-issue series and all of the variant covers, for less than a tenner seemed like a deal to me.

Unfortunately, Cho is only the cover artist for this series but bitching about that too much would be doing a massive disservice to the interior artist, Homs. I’ve not come across Jose Homs’ work before but I really enjoyed it here in Savage Red Sonja. He has a great understanding of anatomy and I didn’t see a single awkward or unrealistic pose. I especially liked some of his slightly more dynamic panels where there are overhead view of standing characters with perfect foreshortening.

The battle scenes are full of energy and movement and there is no shortage of bloody violence and death as Homs ensures that Sonja lives up to the ‘Savage’ part of this series’ name.

The plot sees Sonja out in the titular Frozen Wastes, leading a band of warriors against raiders. These are no ordinary raiders however, and Sonja winds up being captured and taken to a subterranean world of cannibalistic Yeti-men where imprisoned warriors are used as slaves and even food. Ruling over this twisted realm is a creepy queen with the ability to heal wounds in an instant; an ability shared by her warriors who have some sort of link to the Queen. Essentially, their injuries are mirrored on her own body and and both the Queen and her injured men can instantly recover from stab or slash wounds.

This seemingly immortal queen, as the only female, has been the sole source of reproduction for her people over the ages but she desires more children – stronger children – to ensure the survival of her tribe. What she seeks is some sort of freaky lesbian sexy time with Sonja to achieve this. I don’t quite know how the biology of all this is supposed to go down but Sonja is having none of it, despite being overpowered and even put on a leash as the Queen’s (sex) pet.

Sonja manages to escape, reinvigorate the enslaved men, and start killing shit as she refuses to bend the knee and accept her imprisonment in this sinister underground world. Heads roll and the blood flows as the She-Devil with a Sword hacks her way through yeti men, hulking berserkers and massive beasts.

If I have one critcism of Queen of the Frozen Wastes, it’s that the ending is quite abrupt and a slightly unsatisfying conclusion to the enjoyable action that comes before it. It could have done with a couple more pages perhaps. Obviously, as a four issue series, it’s also quite short with a good chunk of this TPB taken up with all of the alternate covers and some sketchbook pages from Cho and Homs at the back.

That said, for what it is, Savage Red Sonja: Queen of the Frozen Wastes is an enjoyable, untaxing read that you can really kick back with. The plot is average but the visuals, the defiant character of Sonja and those glorious Cho covers make this a miniseries worth picking up.

I do have to give a shout-out to the first few pages though, where Sonja is in the wastes and saying that she hates the cold, yet is out in a blizzard in her bikini with a token fur hood/cloak as her only defence from the elements!